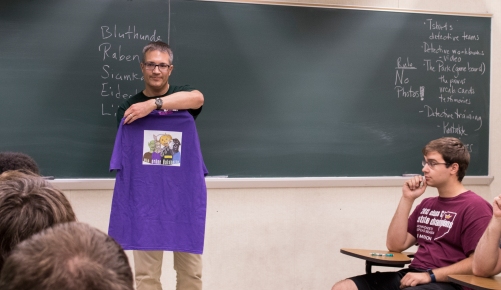 Associate Professor of German Lee Roberts is playing games with his students. “What?!?!?!,” you ask. Well, he turned his Elementary German class (G111) into a multimedia game!

What began in fall 2016 as exercises and a video designed to increase student engagement, quickly became a semester-long, interactive game. Die Grüne Halskette (The Green Necklace) has an array of online and in-class components, and with support from the IPFW Teaching Coalition for Student Engagement, Roberts was able to add features that transitioned the game into a combination card and traditional board game.

The Green Necklace is a team-based game designed to help students enjoy the (let’s face it) more tedious parts of new language learning—like vocabulary memorization—while simultaneously expanding the players’ German listening, speaking, reading, and writing skills. During the game, students become detectives who listen to the game’s background story, consider a list of suspects and their various masks, seek out witness testimonies, and ultimately, try to figure out who stole the green necklace. 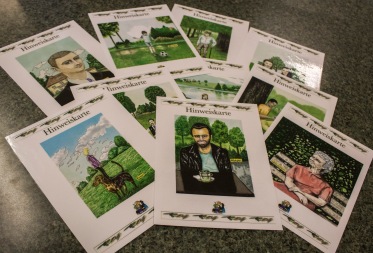 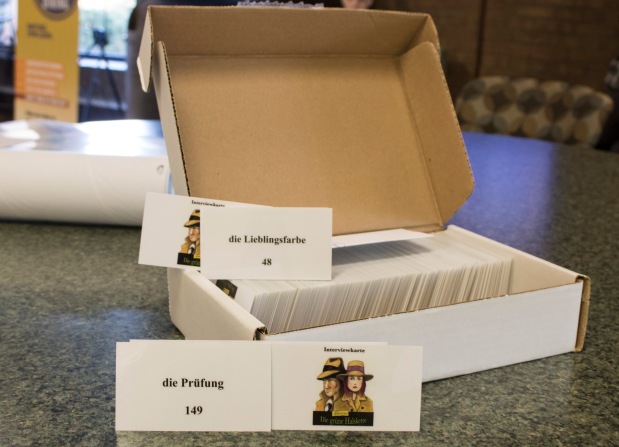 Game Board and Pieces

Through the game-creation process, Roberts developed the storyline and created numerous game pieces including a video background story, the game board, hand-drawn cards with witness testimonies, vocabulary cards, player figurines that stand on the board and represent the different teams, t-shirts that give detective team leaders special privileges to help their team overcome obstacles, and a detective workbook that contains rules and exercises based on the course objectives and also the game narrative.

Roberts added that “The Green Necklace represents an attempt to help incoming freshmen rediscover the joy of learning that they may have known as early elementary school children when games comprised a major part of their learning. Ideally, this mix of diligence and playful diversion will carry students through tougher moments when study gets hard. The tougher the material, the more we must play, I would like to think.”

He has also been developing a second semester-long, team-based game, called Monsterwelt (Monsterworld), which he uses for second-semester German. Monsterworld places students into a fictive hunter-gatherer society struggling to survive in unknown environs. Roberts hopes “that with these two games, my first-year sequence in German will keep students focused through entertainment while they adjust to life at the university.”